Better order to attach the frets

I flipped through the latest American Lutherie without finding much of interest. But I got hooked on a little interesting tip. Harry Fleishman described a different order of attaching the frets to the fretboard, not in the natural order from frets 1 to 18, but more like the nuts on a car wheel. You start with the first and last fret, then the middle fret and so on. He wrote that with this method you got less "back bow", i.e. convex curvature of the neck. He couldn't explain why, but that it worked.

Just that extra convex curvature on the neck after fretting is a problem if, like me, you don't use a truss rod. I grind in a relief (concave) curvature of 0.15 mm in the fretboard, but when I then string on it can be a completely straight neck in the worst case. Then I have to grind more on the frets in the middle to get my relief of 0.15 mm back. This is especially true when it is a hard ebony board.

Since I have a pile of replaced fretboards, it wasn't too difficult for me to test the new method. But it took almost a whole day anyway... I chose a soft walnut fretboard and a hard ebony fretboard of roughly the same size. A piece of quarter-sawn spruce, about 13 mm thick, served as a substitute for the neck. The fretboards were temporarily attached with wide masking tape to both the underside of the fretboard and the "neck", which were then glued with superglue. This made it possible to replace the fretboard on the same "neck".

The "neck" and the two flat fretboards, about 4,8 mm thick, were sanded smooth with my drum sander. The fret cuts in the old fingerboards were sawed up to a depth about 0,2 mm deeper than the tang of the frets. I used leftover brass frets (nowadays I use EVO frets) with an unusually thick tang, the little diamonds (barbs) that hold the frets are 0,85 mm wide while the tang itself is the standard 0,6 mm thickness.

I tried the walnut fretboard first. Without any frets, the "neck" with a glued fingerboard had a back bow of 0,05 mm in the middle - not completely flat. All back bow measurements were adjusted with that measurement. To measure the back bow, I use two 1,5 mm thick feeler gauges together at both ends of the fingerboard so that the frets which are 1 mm high are not in the way. On top of the feeler gauges, I then put a straight ruler and the back bow was measured with feeler gauges in the middle when all the frets were mounted.

I started with the soft walnut fretboard and strung on in the usual order, 1 to 18. Back bow turned out to be 0,15 mm. Then the frets were loosened and mounted in the order like the nuts on a car wheel. When the frets were installed the second time, I fitted the barbs onto the frets, so they ended up on fresh wood in the fret groove between the old scars from the previous fret barbs. This time the back bow was 0,1 mm. A small improvement.

With the ebony fingerboard, I changed the order to make sure the two frettings on the same board were equal. First, the frets were put on in the order of the nuts on a car wheel. I got 0,1 mm back bow. The stiff ebony board needed to be clamped at the ends as I noticed that the tape and glue was a bit loose at one end, but it doesn't affect the result. When I then fretted in the usual way, the back bow was a full 0,3 mm!

Although my experiment could be done more seriously and thoroughly, my conclusion is that the order in which the frets are mounted actually matters. The reason why can be as simple as distributing the tension applied to the surface of the fingerboard more evenly.

Another possible reason is that an open fret slot next to the fret being fitted is compressed a little, while a filled in fret slot cannot be compressed and the fretboard and neck instead bend a little. With the usual 1-18 method, all the new frets after the first one will then bend the fingerboard between the fitted and previous frets. It can be seen as a wave sweeping down the fingerboard, leaving behind an increasingly curved fingerboard and neck.

I will use this alternate order to mount the frets in the future. 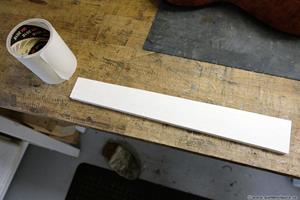 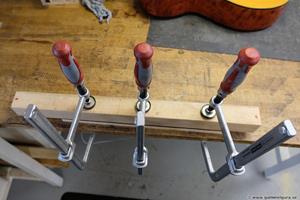 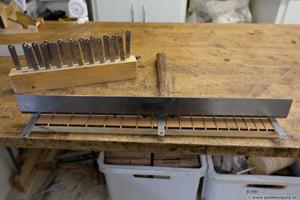 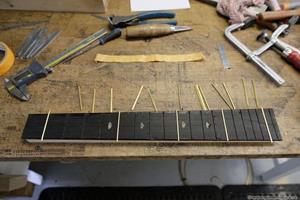 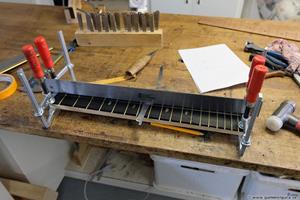 A "walker" for the wooden clamps

Wooden clamps are wonderful, they are light, reach far, and I mostly use them to make a "clamping table" with the guitar body or a wooden plate. A disadvantage is that when you tighten the clamp, the upper jaw of the clamp moves about 1 mm due to Pythagoras' theorem and the construction of the clamp. It happens that this small movement makes a difference and bends or moves what you want to glue. To avoid that effect, I bought a number of metal sleeves that can roll on top of the caul and counteract the movement. A hole in the sleeve and a wooden peg on the vise make it easy to keep it organized. 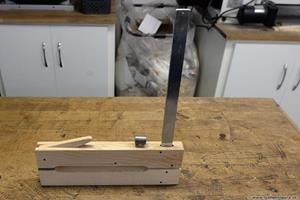 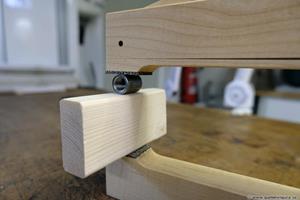 You can buy the same material that dentists use for fillings and build up an nut slot that is too deeply incised. An alternative is superglue and bone dust, but I think this filler is harder. The parts, which can be bought online (e.g. alibaba), consists of a curing lamp which is purchased separately, the filling itself and primer for the filling. It's easy to use, primer and filler are brushed on and the curing light is left on for 20 seconds. 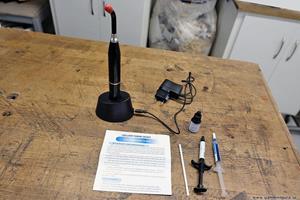 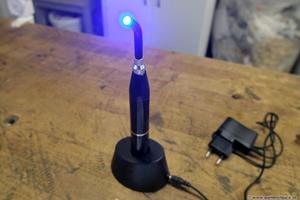 At IKEA there is a material called PASSARP which is intended to cover the bottom of drawers. The material is light and relatively hard and rigid. It is also soft and the guitar slides easily on top of the material. Finally, it has small printed ridges that allow the guitar to rest on only a fraction of the entire surface. It will be used when I have a modern and scratch-sensitive guitar on the workbench, normally new scratches are just a little more patina on the Old Guitars! I usually use my rubber yoga mat which holds the guitar better. 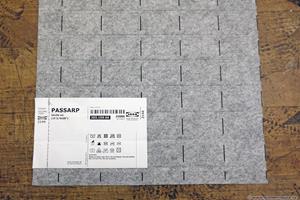 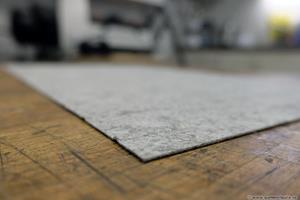 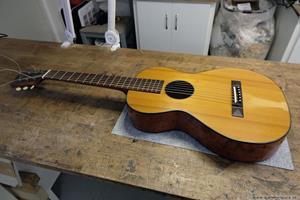 Tube socks for polishing the lacquer

I have done this for a long time, but perhaps not mentioned it. As long as you hold the guitar properly without the thumb with your left hand (for me) it's just a matter of polishing! 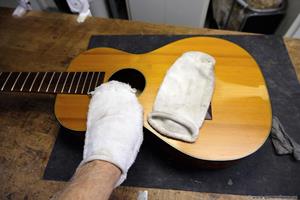