To begin with, I reviewed my way of using hot hide glue. After a chat with Per Marklund, I was verified that he used a thinner mixture of the hot hide glue than the one I usually use, I had started to think in those paths myself. The advantage of this is that the glue becomes thinner and can penetrate deeper into the wood. Now I make the standard glue a little thinner and have also filled a small plastic bottle next to the glass jar in the heater where I dilute that mixture with half water to a very thin glue. When I glue, I wet the wood first with the thin mixture in a few rounds, then on with the standard hot hide glue. When I tested this on a fretboard, you could see that the thin glue was pulled into the wood, it quickly became dry spots here and there. The same thing happened with the underside of the bridge. I think the joint will be stronger that way.

After some thought, I realized that the best solution to repair the top under the bridge is to make a hole in the top where the top damaged. The hole is then filled with a thick piece of spruce that both fills the hole and acts as a bridgeplate on the inside. The spruce that replaces the hole in the damaged top cannot come loose, as the same piece of spruce is glued on the inside as a bridgeplate. In my case, it is very simple, as the middle of my cross-shaped bridgeplate is as made for the purpose. I had a few pieces of extra thick 8 mm spruce top blank that I could test with. I'm lucky to have friends with spruce logs and band saws!

I used one of my ongoing GammelGura tests of the new methods. Also on this one, the bridge was ornate and the bridge had come loose and been re-glued. Unlike the previous GammelGuran, I made a replica bridge in fresh rosewood, on the one that the bridge came off, the bridge was made of softer fruit-wood. There was a lot of damage in the top under the bridge, in addition to two rows of stringpin holes and screw holes. 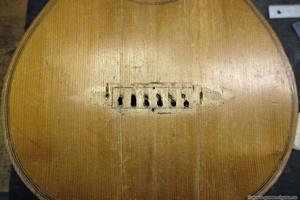 The bad area was marked out and a hole was cut. The hole should be made as small as possible and always smaller than the bridge on top, what was left of the top under the bridge was not completely flawless, but completely OK. 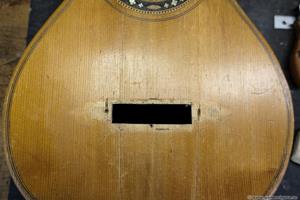 The middle part of my cross-shaped bridgeplate was formed in 8 mm thick spruce. When placed in place on the inside of the top, it was easy to mark the hole with a sharp pencil. 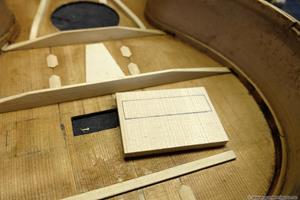 The excess spruce around the marking was milled down about 3,5 mm (a little more than the thickness of the top) in my simple little milling jig. The spruce is attached with the masking tape & superglue method to the workbench, which works as a double-sided adhesive tape. 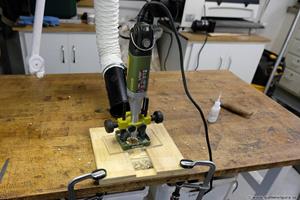 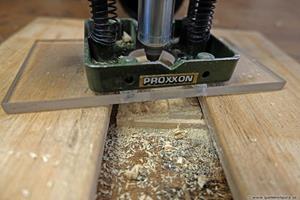 This is how the combined bridgeplate and puzzle piece that will fill the hole in the top became. After a bit of polishing, I was able to get a good fit in the hole. This construction makes it impossible for the "shim" under the bridge to come loose! 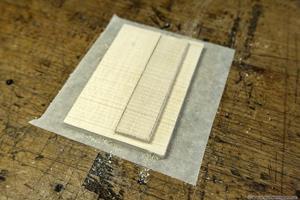 The spruce slab was leveled against the top with a small, handy aluminum profile with self-adhesive sandpaper. 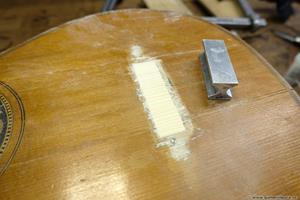 Inside, the cross-shaped bridgeplate was formed with its two wings, all three pieces were then glued with my new method with hot hide glue. 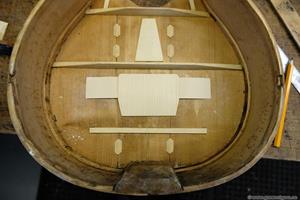 When I glue, I make sure to tighten properly with strong clamps! I have also started using greaseproof paper as often as plastic wrap as a release agent. The advantage of the greaseproof paper is that it can be reused and that it is more stable than the thin plastic that can sometimes be squeezed into a joint by mistake. Greaseproof paper also lets moisture through, and the warm hot hide glue dries faster. 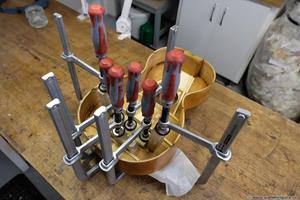 After gluing, a final leveling was done by scraping with a backed razor blade. 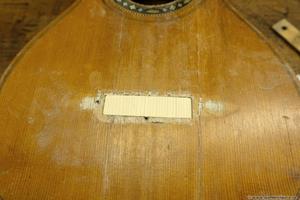 Here we see the bridgeplate at a later stage, where plugs and rounds in bubinga have been glued in. 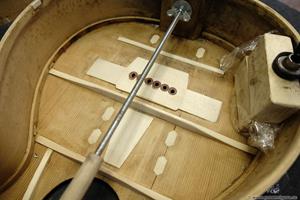 In the future, I will spend more time getting loose bridges without damaging the top, it is one of the most important details when disassembling the guitar, I have realized. My heat lamp should be allowed to heat the bridge and the glue properly before I start to loosen, it takes a little longer, but it's worth it. On the guitar where the top is already damaged under the bridge, I will use the method I describe here for the best possible durability.