Lately I have been doing a lot of repairs. Not all are worth mentioning, but some are interesting, such as this Söderman lute. It was to be repaired to a playable condition, but when it turned out to be an unusual and early Söderman, I put my soul into it. It was a half GammelGura conversion / renovation where none of my inventions or improved bracing patterns were used. On the other hand, it got a carbon fiber rod in the neck, a new fingerboard with EVO straps and a new bridge with intoned saddle. The tuning screws were replaced with better, time-typical originals that have been left over after previous renovations.

When I first got it in, I thought someone had been inventive and fitted three extra tuning screws by sawing off the head. Looked amateurish. It came with a Levin tailpiece in sheet metal from about the 1940s and a clumsy wooden saddle on top of the pinbridge. Someone had been on it.

With the bottom off, I got a nice surprise in the form of a dating to 1920 (the oldest Söderman I have seen so far) and also numbered to the 198th instrument. When he, according to an article, started building lutes and guitars In 1917 he kept a high tempo, one can perhaps count off the 50 violins he started building when he was 12 years old from the number 198. He have manufactured at least 2500 guitars and lutes until 1971, violins and mandolins not included.

After inspecting the details, I realized that the extra tuning screws were original and that Söderman himself mounted them. The wooden nut was clearly original for nine strings, the bad and ill-fitting tuning screws that were on were replaced. No wonder, really, he was both inventive and did not follow ordinary conventions. I think this was one of the first attempts to build a lute with more than six strings. Later similar lutes from the 1930s have the same short string length, 59,5 cm, but only eight strings with two tuning screws intended for a mandolin. It undeniably looks more professional, and he may have come to the conclusion that a doubled G and e string is enough.

Unlike later lutes, this one had solid birch at the bottom and sides, later lutes have a three-layer laminate.

The fretboard was made of bad walnut with a 45 degree run-out and could not be loosened in one piece. An odd detail was that the end of the fretboard was floating on the top with an approximately 3 mm thick fitting piece between the top and the underside of the fretboard. The shim was carelessly made and only covered the middle of the fretboard, leaving a large air gap around it. The bridge, also in walnut or something similar, had cracked along the length and been glued together. I chose rosewood blanks for a fretboard and a bridge with a similar color as the originals. 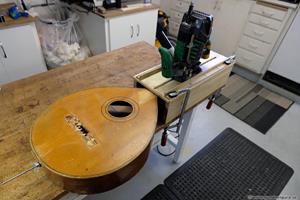 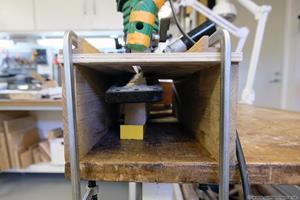 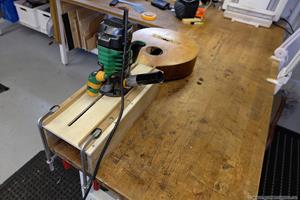 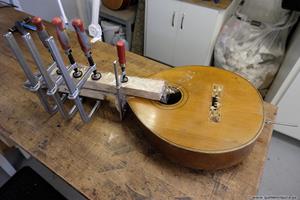 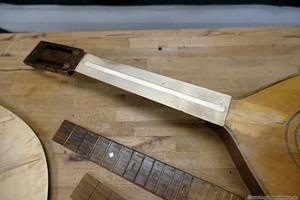 The milling for the gluing of the carbon fiber rod in the neck was done with my usual milling jig which works well even with the neck glued to the body. 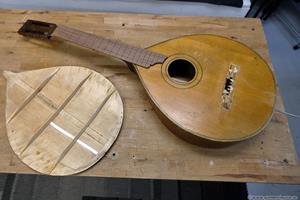 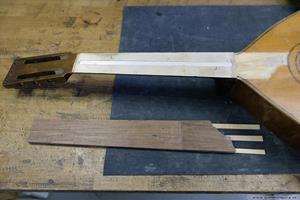 The fretboard was given a 16″ radius and the decorations in celluloid were transferred from the original board. Gottfrid had fitted the decorations nicely, a little better than what I managed in the new board actually! The beautiful shape of the end of the fretboard was copied, but I did a better job with the fitting piece between the top and the underside of the fretboard. The bridge got a similar shape as the original, but also an intoned saddle. 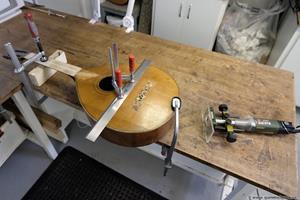 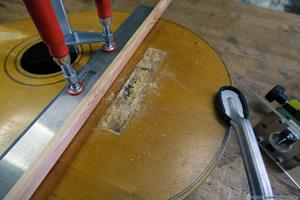 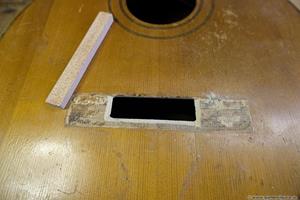 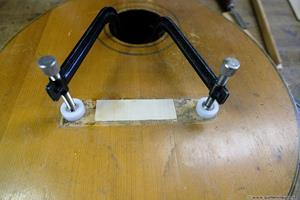 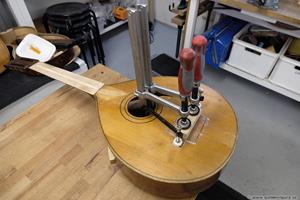 Under the bridge, the top was broken, and a shim was glued in.

In order to be able to reshape the top and repair the long crack on the bottom in the best way, the bottom was loosened. In addition to the dating and a short pencil text at the back, it was also revealed that the good Gottfrid had miscalculated the placement of one of the braces, the holes for the stringpins rubbed along the edge of one of the braces. One brace was replaced and a bridgeplate in spruce with hard buttons around the stringpin holes was mounted.

All bottom braces were more or less loose, however, the braces in the top sat well. To be able to straighten the sunken top, all braces were loosened. The braces in the top had the wrong bend in the contact surface towards the top and had to be reshaped in the other direction to push up the top, they at the bottom had retained their shape and only needed to be re-glued. 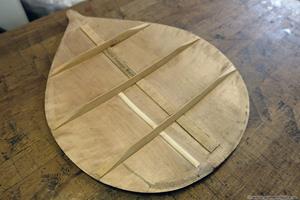 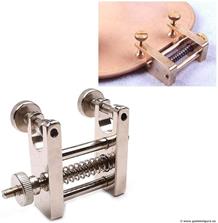 The crack in the bottom was glued and secured with a long cleat. A very practical tool for cracks in a bottom is a special clamp used by violin builders, an "edge clamp", with which the edge can easily be forced together during gluing. 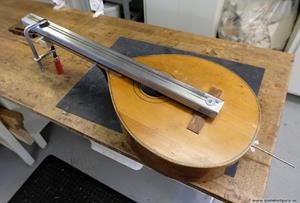 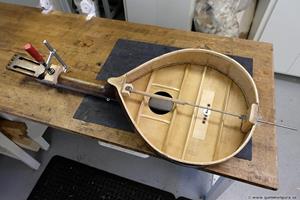 Neck and neck blocks are in one piece on a lute like this. It is not possible to change the neck angle in the usual way. But it turned out that the angle with the top in the right shape, a new lower bridge and a straight neck was perfectly OK if the rim was squeezed together a couple of mm lengthwise. A special jig in the form of a threaded rod through the endpin hole was used to pull the rim together to the correct shape for the neck angle before the bottom gluing. Normally I fasten it with a screw on top of the neck block, but here a small wooden block was glued on for better alignment of the bottom with the rim. With the help of a metal beam, which was attached on top of the fretboard with clamps at the neck and a metal screw through one of the stringpin holes, I was able to fix the angle between the fretboard and the bridge top at the bottom gluing. When done, the bottom had to be cut to the rim a few mm in length. 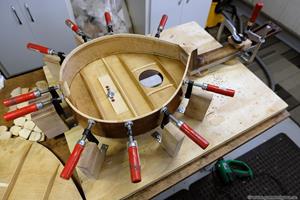 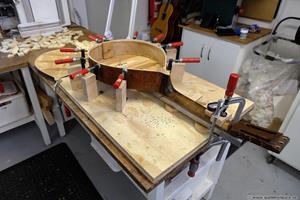 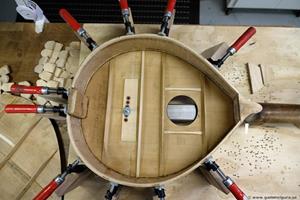 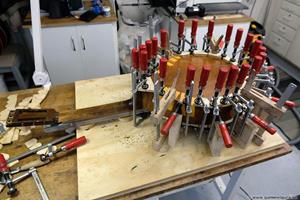 As the bottom shrank in width, it was impossible to get an exact fit to the side, especially when the side was squeezed lengthwise. In my jig, I could have forced everything in place, but then you build in tensions that are guaranteed to result in new cracks over time. I hesitated if I would mill a binding around the bottom, but I let there be a small gap between the edge of the bottom and the side.

The kerfing on both top and bottom was very thin, to get more glue surface for the bottom I glued on an approximately 2 mm thick kerfing in linden from a wooden shutter. The bottom was glued with hot hide glue with urea for longer opening time. This time I applied the glue along the entire edge and heated the glue as I forced the bottom with a heat gun. On the neck and bottom block, I use as before normal hot hide glue, you have time to clamp the two ends of the bottom before the glue coagulates if you heat the wood properly just before gluing. 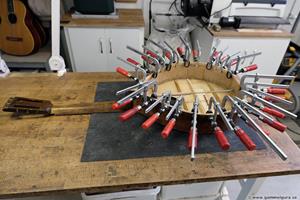 The most special thing about the instrument is otherwise the three extra strings. I added Newtone Heritage 0.11 strings and doubled the unspun e and b strings with loose matching NH strings. The octave string on G had to be a 0.09 string that I happened to have at home. Two grooves in the string pin holes for e, b and G strings with solid stringpins were filed to make room for two strings in one and the same hole. It's a little trickier to re-string with two strings in one hole, but it's not a big problem. As the strings end up in each edge of the stringpin hole, you get the approx. 3 mm spacing between the strings you need.

The wooden nut original was copied, but made of bone and not wood. The intonation for all strings was done only on the saddle according to the usual 12th fret method.

The lute was given a coat of spirit based varnish on the entire instrument, fresh wounds and dings were dampened with potassium permanganate and Herdin's "Carl Johan" water based stain before varnishing. The super-shiny new varnish was then dampened down with 000 steel wool.

The fretboard was fretted with EVO tape after a first sanding of relief of the fretboard. The crowning of the frets was also made to a relief of 0.15 mm. When I use my new jig from Stewmac, not much metal has to be ground down on the frets.

It turned out that the lute worked very well with the extra tuning screws. An extra bonus is the three skewed treble tones you can pick up on the three short extra strings above the upper saddle! I quickly learned in what order I had to to tune. It was a little more difficult to tune the extra tuning screws, but even there I quickly learned a good method. The sound is like a twelve-string guitar, but with a firmer base and less jingle & trebles. Since I'm not fond of all the rattles from a 12 string guitar, I think it sounds better with 9 than 12 strings. It sounds and plays really good! 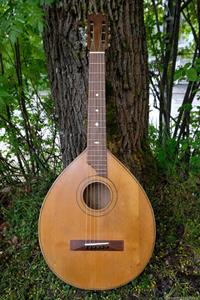 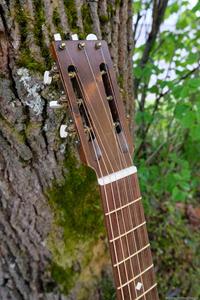 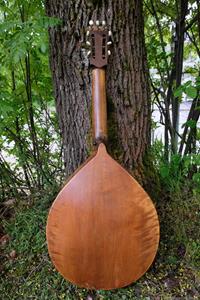 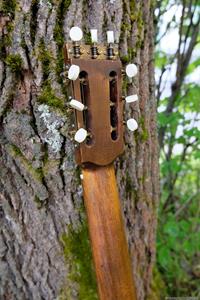 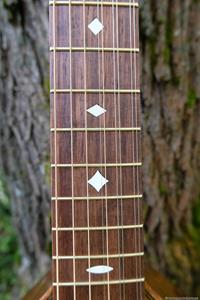 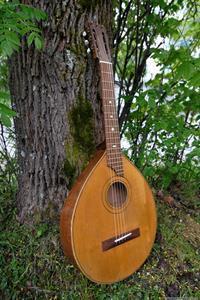 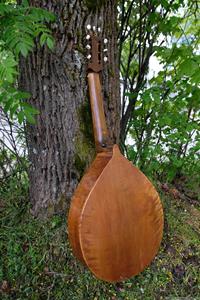