It's been a while since I wrote a blog post, but that does not mean that the work has stopped. On the contrary. Two of the three in the ongoing batch are ready and the third is on its way.

Other things have also happened. I have had an apprentice, Björn Göransson, in the shop for a week. It is always a nice break from the usual work, but also a hard working week. This time was no exception. After some hesitation, we grabbed two almost identical Levin parlor guitars in good condition. They were so similar to each other that we had to keep a close eye on all the loose parts so as not to confuse the two when we glued the guitars together. One from 1907 and one from 1913. Both from before 1920 with poplar neck and a pinbridge, my favorites when it comes to Levin parlor objects. Doing two GammelGura in one week is on the border of what is possible, but we succeeded this time. Partly because both were in good condition without cracks and because the week was divided into two parts with a free weekend in between. Björn had relatives near Örnsköldsvik which he visited during the weekend. The two holidays were needed for the varnish and glue to dry. The last two days could be used exclusively for the very last steps, fretting, manufacture of the segmented saddle and nut, and the final setup.

To catch up, we worked hard 8: 00-17: 00 and with an extra session between 20: 00-22: 00 in the evening. Since we had two instruments, we were able to work in parallel with several of the steps and thus gain time. Such a high pace can not be sustained, the two free holidays were really needed.

In general, it takes longer to make an GammelGura now compared to when I started in 2013, there are more steps to be done and some things I have understood must take their time. The bottom gluing, the gluing of the carbon fiber rod, the varnish, the vibration, the measurement of the intonation and the time for the neck to settle with strings at tension are the steps that take the most waiting time. Seven days is a little too short a time for a complete GammelGura, nine days is probably what is required to do a good job without shortcuts at a reasonable pace.

Well. The only mistake during the work was when I had to drill for the hard button around the string pinhole in one of the guitars. I pressed too much and the top broke around the hole. The positive was that it was possible to save with a glued-in 12 mm plug in the radial spruce, a new plug and a new hole and a button could then be mounted in the new spruce. When everything was repaired, the damage was completely hidden under the bridge, and you could barely see that anything had happened. If you make a mistake, it is important to be able to repair the damage, this time it was very successful.

Björn plays old finger picking blues and wanted good separation between the strings and high volume. The segmented saddle and plugs give both of these properties together. In order not to get two identical guitars, we chose to give one harder plugs to maximize the volume. My usual set with BGGGgg was changed to RFFFff on it from 1913 (from bass to treble strings, B = Birch, G = spruce, F = Pine, R = Red beech, uppercase letters end wood and lowercase letters radial wood). When I tested different plugs on my test guitar, I got an even balance between the volume of the strings for both variants, but higher volume and a slightly rawer tone on the one with harder plugs. I had never tested beech and pine plugs firmly glued to a guitar, so I was curious about the result. It turned out that that my theory was verified. When Björn played and sang with 1907 the guitar with softer plugs, the song overpowered the guitar, with 1913 with harder plugs, the guitar's volume matched the song. Both Björn and I thought that the one from 1907 with softer plugs was the one that had the most beautiful sound. The one from 1913 had a higher volume, but was also a little rawer and sharper in tone.

Both got all the attributes of an GammelGura, new tuners, carbon fiber rod in the neck, new fingerboard and bridge in rosewood, new bracing, oversaddle intonation, segmented saddle and each a K&K mic.

As usual, about 0.5-1 mm needed to be thinned out in both top and bottom, Levin made almost all of his instruments with extra thick wood in the top and bottom to avoid reclaims. The bottom was thinned both with the drum sander and hand sanding with coarse sandpaper. The tops were planed thinner on the inside and sanded with a sanding mouse. In the top, I just thin out the large area under the sound hole. You want the top to be as strong as possible around and above the sound hole. The area around the bridge is what is most important to get a good sound and there the top must not be thicker than 3 mm for the best sound. In these two we jumped over the thin top brace under the bridge plate, instead the middle part of the cross-shaped bridge plate was made a little longer. I think it's good for the sound and that the top is strong enough without that brace.

During the free weekend I had time to make one of the measurements of the intonation and vibrate the guitars with strings at tension. The last two days, a nut and a segmented saddle were made. Here are pictures when Björn tested the first finished guitar! 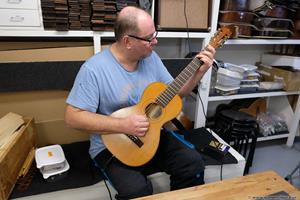 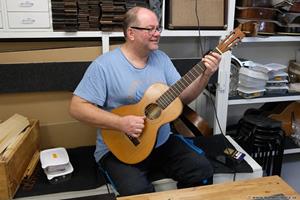 Since it was dark and snowstorm outside and not much time, I could only take pictures indoors. Pictures are always best when taken in sunlight.

1913 Levin had something as unusual as a celluloid medallion with the print intact. 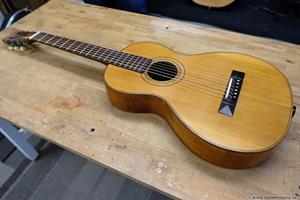 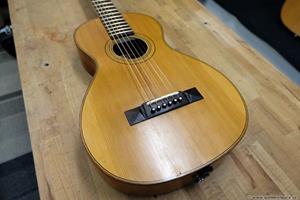 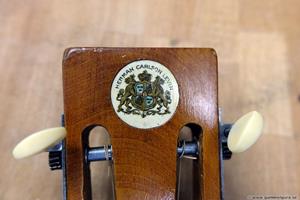 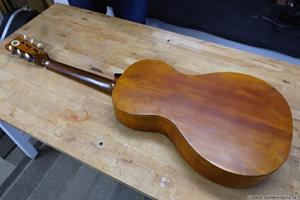 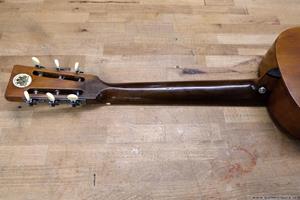 1907 Levin had a lot of crush damage to the back of the neck in the soft poplar wood from a medieval capo. Thanks to the two free days, I was able to fill in the pits with tough number 30 super glue from Stewmac. It was allowed to air dry for two days and could then be sanded level with the neck. In principle, the pits are filled with transparent plastic. The repair is still visible, but feels good to the fingers. The medallion was completely white without print as they almost always are. The bottom and side were wood grain painted in a darker color than 1913. 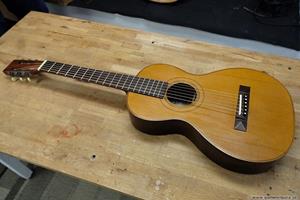 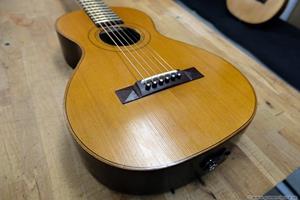 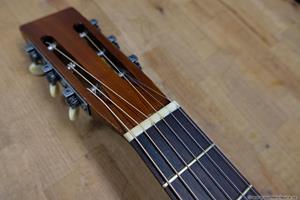 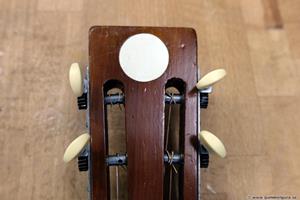 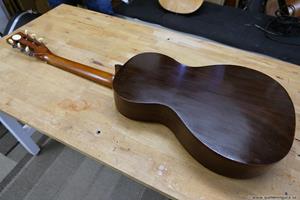 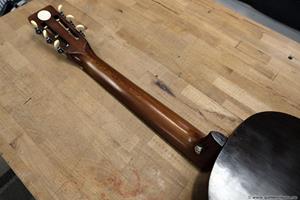 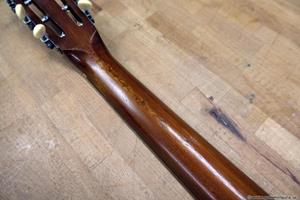 Björn was very happy with both guitars when he picked them up on Wednesday morning after a fun but hardworking apprenticeship week! 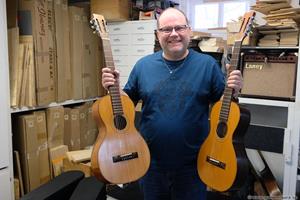