I have been thinking a bit about how I brace up the top in GammelGura guitars. It was time to improve my methods.

As I recently made a go-bar jig, new possibilities have opened up. Among other things, I can glue braces and spruce tiles to a surface that is bent in both directions, both across and along the guitar. With my old cauls, I got the right bend only across the guitar. Which is optimal for the large braces, but not the tiles with a larger adhesive surface. You can also glue several complex pieces at once as the go-bar has bars that take up less space.

I am renovating a rare PA Anderberg parlor from around 1905 and the USA. Some original braces were glued to it and I noticed that it was actually easy to put the ends of the brace in recessed holes under the kerfing. A big advantage is also that the brace is attached without glue while measuring the location of all the details of the top. Above all, it was nicer than my previous stop blocks on the ends of the braces! The guitar also had a thin bridgeplate in maple across the top that tapered on either side of the bridge, like the one in a Levin parlor but done better.

The six GammelGura in the ongoing batch have received a new variant of the bracing pattern. Here is a picture of one of them with unglued and untrimmed braces and plates. 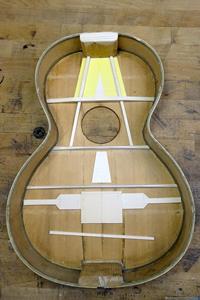 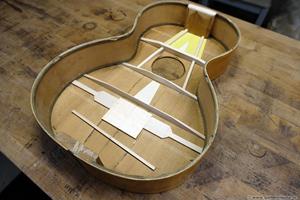 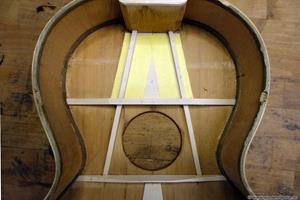 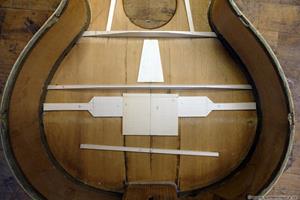 All ends of the transverse braces have been inserted under the kerfing. It is not difficult to cut small gaps with a knife, chisel and scrape out the wood with a curved scraper knife that is otherwise used to clear saw tracks for frets in a fretboard. It is actually less work than gluing everyone on the small stop blocks I used before! The ends of the bridge plate wings, on the other hand, are not tucked under the kerfing but are thinned down to nothing at the end so as not to tie up the top unnecessarily

All braces and plates are made of spruce with standing grain. The underside of all braces and spruce plates is given a small 30 ″ radius on the underside, the same radius as the bowl in the counter in the go-bar.

Spruce plate 1 (with the yellow tape) is 1,5 mm thick and has the grain across the grain of the top. As the oblique edge passes several of the top's annual rings and also the edges of the fretboard, there will be no stress point for a crack in the top. As the fingerboard shrinks, the tension is distributed over several of the grains in the top, hopefully it will not result in the obligatory cracks with time. In order not to pre-tension the top when gluing the fretboard, I also use Old Brown Glue (hot hide glue with added urea) instead of hot hide glue as before between the fretboard and top. OBG does not shrink when it dries as hot hide glue and fish glue do.

The A-frame braces 2 and 3 are rectangular and 6 x 6,5 mm. Both have been jacked out 1,5 mm on top of spruce plate 1, which means that they are 5 mm thick above brace 4. Spruce plate 1 must be intact to do its job in the best way.

Brace 4 is rectangular and is shaped from a blank that is 8 x 15 mm. The ends are thinned down from 6 cm from the end to about 1 mm thick at the far end. I make two gaps on the underside of the brace that exactly fit the A-frame braces 2 and 3

Brace 5 is triangulated from a blank that is 8 x 15 mm. The ends are thinned down from 7 cm from the ends and small outlets are made to insert the ends of the A-frame ribs.

The unnumbered spruce plate between braces 5 and 6 is 1,5 mm and thinned to nothing at the edges. The edges of this plate also pass several grains in the lid so as not to give a stress point for a crack.

Brace 6 is triangulated from a blank that is 8 x 15 mm. The ends are thinned down from 7 cm from the ends.

The spruce plates 7-9 for the cross shaped bridge plate are all in 3 mm thick spruce. The wings 7 and 9 have the grain across the grain of the top, while the central plate, about 8 x 6 cm, under the bridge has the grain along the top for best rigidity. The wings are 3 cm wide up to the edge of the bridge where it narrows to 1 cm. My hope is that the guitar top responds faster when playing as vibrations travel about 4 times faster along the grain than across. The wings also hold the top together and reduce the risk of cracks in the edge of the bridge ends, especially if it is a pyramid bridge with a straight edge.

Brace 10 is 3 mm thick and about 0,5 x 20 cm, the length varies depending on the top shape. On some European parlor guitars it is not needed as the bridge is close to the end block.

The bridge plate with its wings is glued together separately with hort hide glue, the joints are ground at 45 degrees to make them stronger. After about 20 minutes, it can be roughly shaped, the underside sanded to a radius and the edges chamfered. The central plate is given a shape similar to the profile of an aircraft wing. 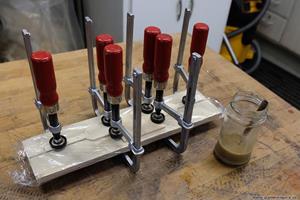 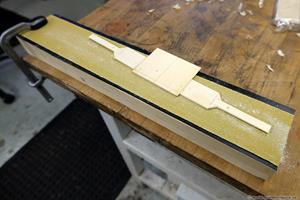 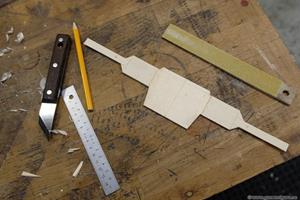 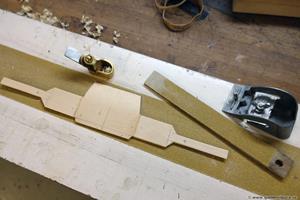 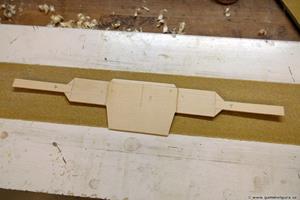 All braces and plates can be glued in a single session in the go-bar jig. I use abutments so as not to crush the soft spruce and distribute the pressure from the go-bar ribs, they are placed in the right order before I start gluing. The abutments for larger surfaces have a soft 4 mm yoga mat in rubber on the underside to distribute the pressure over the entire surface. Special aluminum brackets are made for the triangular ribs and the sloping ends of the ribs. The large abutment on the aircraft wing-shaped central part of the bridge plate has been traced to be extra flexible. The flat and thin brace 10 has only a strip of transparent plastic on top. 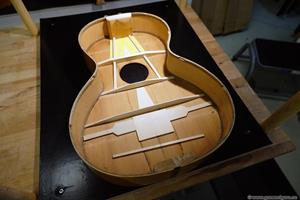 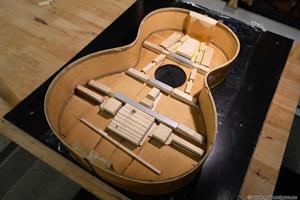 The A-frame braces are guided in from the side through the holes in the brace 4th. There will be a lot of smudges with the hot hide glue, which is why I protect the spruce in plate 1 with low-tack tape. I always use a thin damp cloth, a table knife and a thin palette knife to wipe off excess glue. 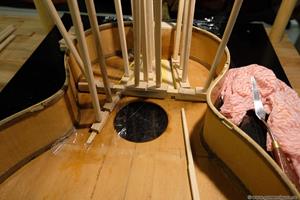 It will be a whole forest of go-bar sticks when you are done! My bars are 8 mm birch sticks that are flattened down to about 6 mm with the help of my drum sander. Each part that is glued is heated with a heat gun, set at about 300 degrees C, to extend the gluing time. Previous glue can also be reheated, one of the many benefits of hot hide glue. 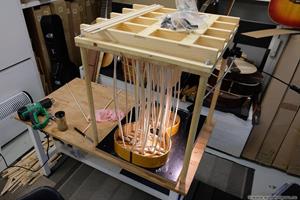 It remains to be seen whether the extended wings on the bridge plate gives the desired result, if nothing else, the extensions helps to hold the fibers of the top together. 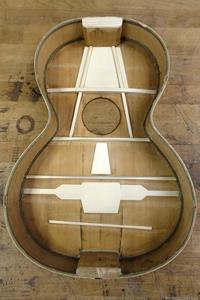 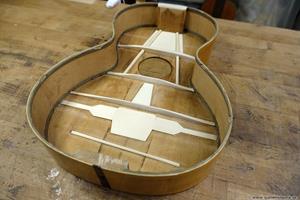 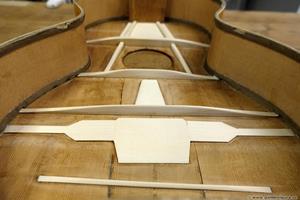