A very important detail for the best sound in an GammelGura is to make sure that both the top and the bottom have the right thickness. Levin parlor guitars in particular usually have too thick tops and bottoms. The top can sometimes be 4 mm thick, the bottom is typically 3,5 mm but can be 4 mm as well. European and American parlor guitars almost always have the right thickness, but it happens that some European guitars have a 3,5 mm thick bottom and American for a thin top of 2.0 mm.

With each new batch, I thin out thick tops with small planers and a sanding mouse. Thick bottoms I thin with my drum sander. I recently bought a larger and wider drum sander that I used for the first time last batch. It was about to end in disaster when some of the bottoms got stuck… luckily it was possible to repair the mistakes with inlays of 0.6 mm maple veneer. It also turned out that the drum sander grinds more on the ends of the bottom when I feed it in. There are two steel rollers on either side of the large roller with sandpaper to press the object down against the conveyor belt. When the bottom is only pressed down by one roller, the bottom springs up and the sander removes a few tenths mm more, which makes the bottom a bit too thin at the ends.

That was a problem. I thought about it and the solution was to make a suction table. With a vacuum from my industrial vacuum cleaner, you should get enough power to keep the bottom flat and safe in the drum sander. Instead of buying an expensive suction table, I made one myself, as I did not know if it would work in practice.

A strong wooden plate was made, the ducts inside were made of strips of wood that were glued in at regular intervals and which were then milled the other way to get a grid of air ducts. 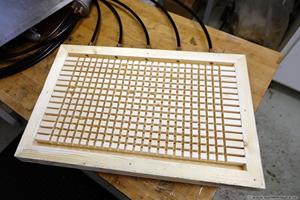 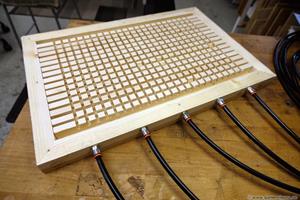 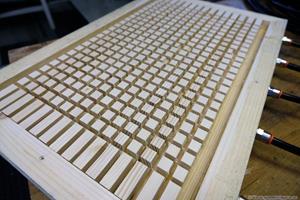 Powerful vacuum hoses and handy nipples were available for purchase in a shop in town, the hoses can be easily disconnected by pressing the orange hat on the nipple. To make the flow greater for the vacuum cleaner and distribute the suction, I mounted 5 hoses, I do not know if it was necessary.

An aluminum plate had a whole bunch of small 1,5 mm holes drilled, the holes end up in the middle of each intersection between four squares. Since only guitar bottoms are to be run in the drum sander this way, the pattern was made in the shape of a guitar body. It was a bit of work to drill all the holes! I also made a rubber mat with punched holes. A feature is that the vacuum around each small hole is evenly distributed as a suction cup in the small volume created by the rubber mat. 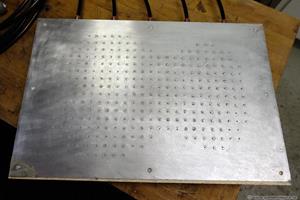 To connect the vacuum cleaner to the five air hoses, I bought a plumbing connection with two lids at a local hardware shop. A large hole was drilled in one lid for the vacuum cleaner hose and five more nipples was mounted in the other lid. 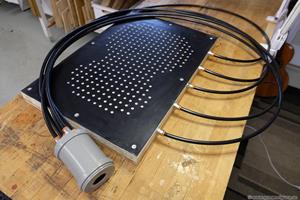 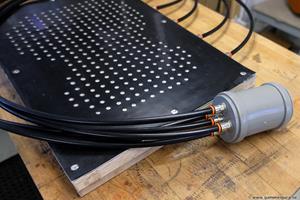 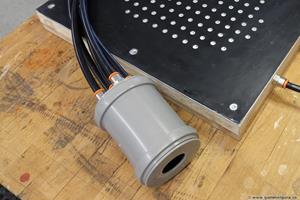 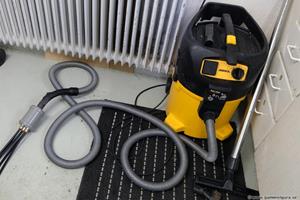 This suction table was already made during the Christmas weekend, but only came into use now in the ongoing batch. Two Levin and two European guitars had too thick a bottom. They were all about 3,5 mm thick, the ideal measurement is about 2,5-2,7 mm for a maple bottom. Then you get the best sound but basically the same strength as a thicker bottom. 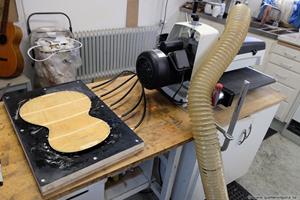 The next problem was that the bottom was not flat but bowl-shaped by the braces glued in with a radius. I got the bottom to attach by pressing hard all around, but the vacuum suction could not hold the bottom in place. I felt like it would not work. BUT. By really soaking the bottom, the wood swelled and the bottom became both more flexible and flatter. It sat like a slap in the vacuum table and it was impossible to loosen it without turning off the vacuum cleaner! When it attaches, the sound of the vacuum cleaner changes and it has to fight harder. A rough vacuum cleaner is not cooled by the air that is sucked in but by a separate fan, so I think it should withstand 10 minutes of hard driving without breaking. Remains to be be seen. 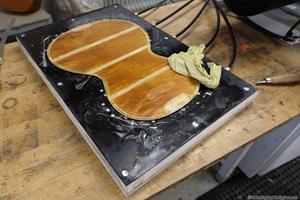 Then it was just to test it all. I first fine-tuned the drum sander so that it took evenly over the entire surface. The hoses protrude on the open side in the drum sander, it was very easy to grind the bottom to the thickness I wanted. By turning off the vacuum cleaner and loosening the bottom from time to time, I was able to control the thickness. 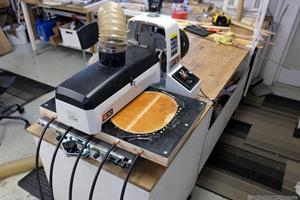 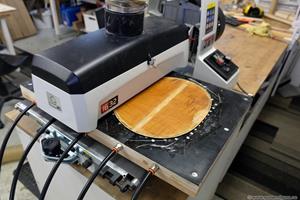 The result exceeded expectations. No problems with thin ends and no drama. Almost perfect thickness on the entire bottom. This bottom was thinned almost 1 mm, but you can still see where the braces were glued. 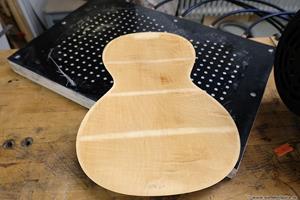 Another bottom caused problems as it was full of hide glue that clogged the sandpaper in the drum sander. But it was possible to loosen the sandpaper and clean it with water and a dish brush. 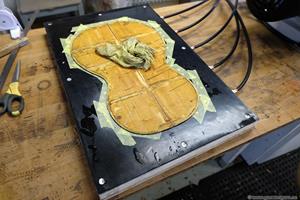 It turned out that the tape was just like the one on rubber so I switched to the yellow low-tack tape instead of the packing tape. If you have several bottoms, you start with the largest and then supplement with tape for smaller bottoms where new holes end up outside the bottom.

I am very happy with my suction table and will use it in the future.