It's no secret that I do regular repairs alongside GammelGura. Mostly simpler modern instruments that needs help, but sometimes they are nice instruments like this Levin 170 archtop from 1937. I have owned a similar one myself, but I sold it on as archtops have never been anything for me. I think they are incredibly cool and at the same time the models that Levin put both the best material and craft on. But the sound of a floating bridge is not my favorite. The tone is loud and harsh and limited in the bass register. A tone that cuts through most things, which is good in an orchestra, but not so fun when playing alone. Levin archtops mostly have better acoustic sound and more sustain than similar European archtops.

Sadly for me, there is nothing I can do to make them sound better. Thinning the top and bottom could be a way, but the job is discouraging. Even with thinner top, the tone will be about the same due to the floating bridge. In addition, it is difficult to thin out without making the top too weak, it takes a long experience to do it just right. The top has a very varying thickness, just in front of the fingerboard overhang the lid is almost 1 cm thick, while in other places it can be 3,5 - 4 mm. What can be done is to glue damage and cracks, reset the neck, refret and adjust for best playability.

The bridg is very beautiful and deliciously cut in ebony. The foot does not have two legs that are otherwise common, it instead rests on the entire surface of the top. The reason is the only longitudinal bar in the top (the bottom has no barcing) that is placed obliquely approximately in the middle of the top. The bridge can move over the brace a little grand like a seesaw, which is probably an explanation why they sound comparatively good for being an archtop.

The original tailpiec is special and made for strings with loops on this model. They are also very weak and have mostly broken off. This guitar had a new Levin tailpiece from a Royal archtop, probably sometime in the 1950s.

It came with a pickguard in good condition for this one, clearly a later well-made replica that was probably made at the same time as the new tailpiece was mounted. It has happened that I made replicas of pickgurads. The originals had a really lousy variant of celluloid in the plate itself which is self-destructive (and which oxidizes and discolors the entire guitar if it is trapped in a hardcase). The celluloid bonds on the pickguard and guitar are of better quality, but all celluloid is more or less self-destructive and shrinks over the years. On one pickguard, I kept the binding around it and replaced the toasted tortoiseshell with plastic, it turned out really well.

These early Levin archtops are the ones that I personally think sound best. They are also more suitable in size, they got bigger over the years. Levin made archtops with only one brace in the middle of the top and nothing at the bottom. Both top and bottom have been carved out of thick wood just like a violin, and have a nice curvature (arched top) that can withstand the pressure from the strings. The neck is almost always a laminate in beautiful maple and fairly stable. European instruments usually have very weak necks that do not hold up, many were also made of plywood and the top / bottom was not cut out as with Levin. Levin archtops have a good reputation abroad where they are sold for higher prices than in Sweden.

This one had gotten a real blow at the neck and the neck block was cracked. The bottom had a crack in the middle joint and the celluloid binding on the fretboard was loose in some places. The neck had problems, the overhanging part and the part above the 1st fret was sloping down. The neck itself also had a slight upward bend in the middle.

I refretted with new frets and did what I could to grind the fretboard straight. Unfortunately, the mother-of-pearl inlays were thin, I took a little too much with the sanding block, the top of one of the inlays disappeared. The very best solution would probably have been to loosen the fretboard and sand the neck itself or possibly the underside of the fretboard in the middle, but then the repair would have cost too much. Loosening the mother-of-pearl inlays is an option, but it also takes time and I think it is difficult to loosen the pieces whole. I crowned and sanded away the last bend on the frets. Apart from the slope off below the 14th fret and a small backward bend above the 1st fret (which really does not matter) the neck and fretboard became straight with a very small relief.

To fix the neck block, the bottom must come off. The block was so cracked that it could not be saved, I made a new one. Inside there was not much to do, a couple of cracks were glued in the top. The bottom, however, had shrunk so much that I had to glue on a 2 mm rosewood strip around to replace the wood that had disappeared. I also glued a center strip over the center joint on the inside. When I loosened the bottom, the glassy and brittle cellulose varnish cracked in several places around the strip. Next time I will use a scalpel and draw around the binding joints before I start to loosen the binding. It did not look nice when I had milled around and glued back the old and thick celluloid binding. I had to work with a black felt-tip pen and black superglue to color and fill in the holes. It took a couple of hours to scrape the repairs evenly with the varnish with a magnifying glass and razor blade. I then applied a couple of rounds of clear spirit varnish on the body to cover the repairs, spirit varnish also adheres well to cellulose varnish. 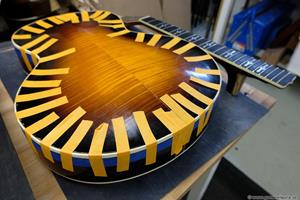 I made a neck reset in the new neck pocket in the neck block and got a neck angle as good as you can ask for. The adjustable bridge has a gap between the two parts of about 1 mm with the correct string height at the 12th belt. A new saddle was made. I stringed it up with 0.11 Newtone Masterclass strings, but you can have 0.12 strings on it without any problems. After a few days of vibration, it sounds like a good Levin archtop should do.

I think it looks better without pickguiard, the owner has to screw it in! 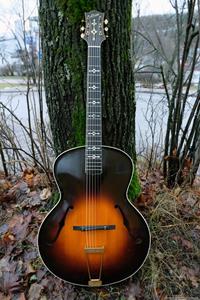 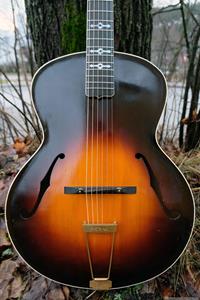 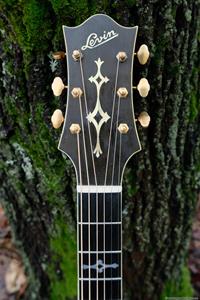 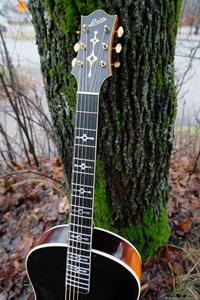 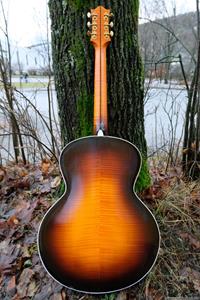 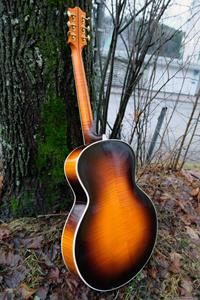 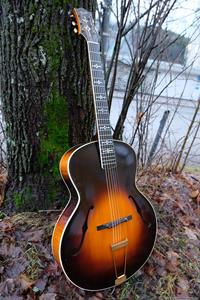