The first GammelGura in the ongoing batch is ready, the harp guitar from around 1890. The year and manufacturer is a mystery. The beautiful bridge and the carvings in the head could indicate that it is made in Sweden, but the light construction with the right thicknesses on the top, bottom and side indicates a skilled craftsman and not a Swedish furniture maker. I think it's a German build. A funny detail is that the fretboard has pearl dots at both the 9th and 10th frets. Banjos has markings on the 10th band and the guitar on the 9th. I have seen guitars from around 1890 with the dot on the 10th band instead of the 9th, but never seen any instrument with both!

Here are some pictures of it when it came in, it was in unexpectedly good condition with only a few cracks in the top, the bottom was loose in some places and the string height was high. The neck had a bend. It turned out later that most of the braces inside were more or less loose. An adhesive joint in the neck foot had come loose (the neck foot consisted of two pieces of glued wood together) and a screw had been pulled in from above through the fingerboard. The "fingerboard" consisted of a 0,6 mm thick ebony veneer glued on top of the neck in hard maple. The fingerboard on the top and neck were in one and the same piece of wood. All three tuners were in good condition. It was strung with nylon core steel strings and thick rusty steel wires as bass strings. It has been played on, but probably a long time ago. 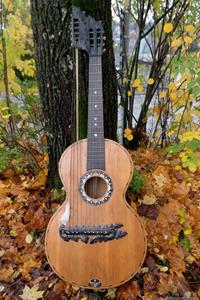 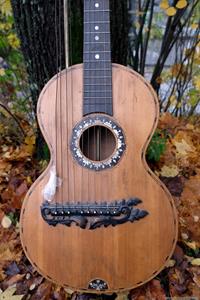 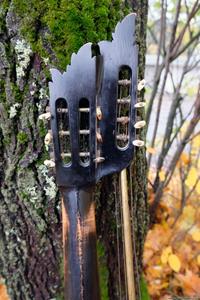 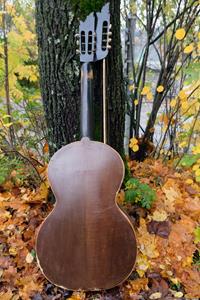 It was not really intended as a real GammelGura as I initially did not try to make it better but just repair it and make it playable. But I could not hold on when I braced the top, the maple bridge plate was replaced with spruce, an extra brace was glued above the sound hole and the brass rod between the neck and bottom block was replaced with a pair of round wooden rods that do not stiffen the top as much.

The bottom was easy to loosen and also the neck minus the top of the neck foot which had to be loosened separately. The neck foot was only held together by the screw, the hot hide glue in the joint had weathered away completely.

In order to be able to mount a carbon fiber rod in the curved neck, I had to remove the ebony veneer. I made an approximately 1 mm thick "fretboard" in ebony from a thin cut from a fretboard blank. When I later sawed for the frets on, the notch for the frets became just so deep that the white maple in the neck could be seen. I took the opportunity to grind in a 20 ″ radius on the maple neck before I glued on the "fingerboard".

The bridgewas a surprise, it was NOT glued but only stuck in with 5 wooden screws that were screwed into a thick bridge plate in maple on the inside. I have never encountered an unglued bridge before! The bridge had a long brass fret along the front edge, as it usually is on old guitars like this one. Very impractical as it is not possible to adjust the string height at the bridge. I therefore replaced the fret with two separate saddles, the one for the guitar part got a small intonation angle. I scraped off the paint onthe top under the bridge and glued it with hot hide glue. I also tightened the five screws with small washers in plastic so that they would be attached to the soft bridge plate in spruce. I filled in the pits for the screws with super glue and ebony dust. The nut in ebony was cracked. I replaced it with a bone nut. The head had a large crack near the brass rod. I glued it with hot hide glue and drilled in a wooden plug from the side across the crack.

The neck had the wrong angle and needed to be aligned about 2 mm instead of a few tenths on the "wings" of the neck foot. I did not want to thin down the top of the neck foot unnecessarily, but instead mounted two ebony wedges on the "wings" of the neck foot with the 2 mm thick part of the wedge closest to the fingerboard. Since I was going to fret a clean fretboard, it did not matter that the mensur (string length) was changed 2 mm, I could chose a fitting mensurt and that placed the saddle right on the small area on the bridge in front of the string pins. The mensur was long, about 655 mm. I did not do oversaddle intonation on this one, instead I intoned the saddle the usual way.

I used a temporary special jig to saw the fret grooves, with clamps and a little imagination you can do many things! 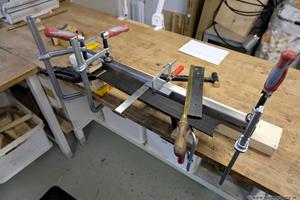 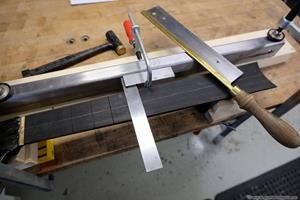 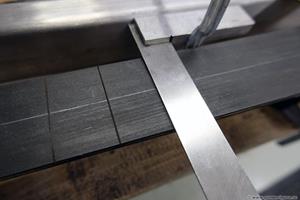 The spread of the string pin holes in the bridge was (too) large and there was no room to glue the neck other than completely straight. The strings still ended up close to the edge of the fretboard, closer than I would like them to be. But it works. Next time I will double check and plug and re-drill the holes if they are drilled too wide. The neck angle gave a low saddle, which is good as the bridge is made of soft maple, between 1,5 and 3 mm high just as I wanted. I also glued the saddles with hot hid glue so that the bridge does not crack. 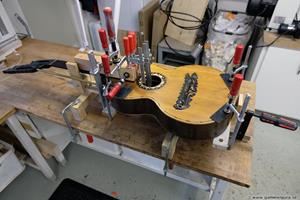 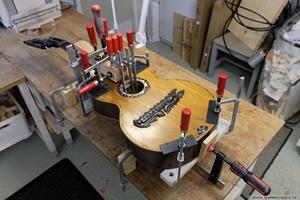 Here I fasten the guitar in a jig with temporarily mounted frets and the strings tensioned. The guitar is fixed, frets and strings are removed and the neck is ground to a small relief. 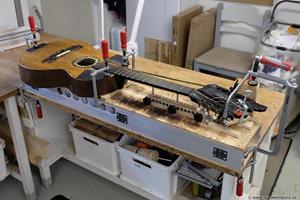 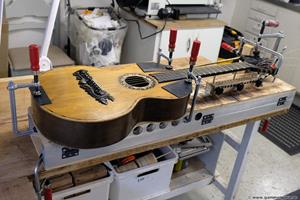 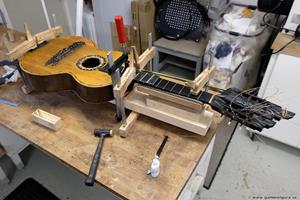 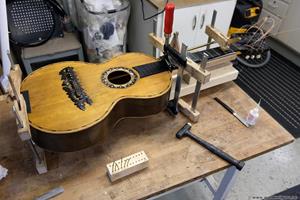 I painted on black spirit lacquer on the neck and foot, but not on the head, which was allowed to retain its original color. The bridge was painted black just around the string pins and the saddles, the body got a coat of clear spirit varnish. The glossy spirit varnish was matted down with 000 steel wool and polished up to semi-gloss with a dry cotton cloth.

The tuners, which did not need to be repaired, were oiled with Tri-Flow and mounted. Funny enough, the tuner hidden behind the head was different with horn buttons while the other two had bone buttons. I still think that the one with horn buttons is original, it only had three screws and the empty hole in the tuner had no matching hole in the wood of the head.

I stringed up with Newtone Heritage 0.12 strings. Bass strings in nylon (lower tension and good bass sound) have been ordered but have not yet appeared. It sounds perfectly OK, it is noticeable that the body has a larger volume than a small parlor guitar. The large bridge is nice, but not ideal for it to sound good. I have it on vibration right now for a few more days and I have already noticed that it is starting to loosen a bit and sound better. With the bass strings on, you will also get a nice string reverb on the harp guitar :-)

The brass rod at the neck was a few mm too short to provide support for the strings, I put a small wooden washer in the deepest bore in the head and for once I used regular carpentry glue (!) To glue the rod to the ends. That glue becomes like a gasket and gives some suspension to the attachment. The neck feels very stable with the brass rod that tilts and forms a small but strong triangle together with the neck.

I took pictures without bass strings on, I will complete the pictures when I get the strings delivered. 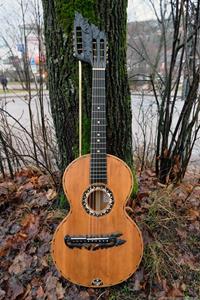 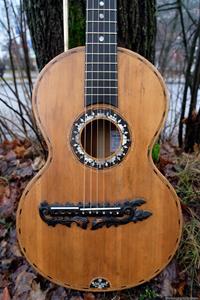 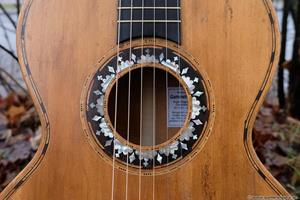 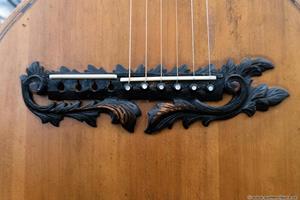 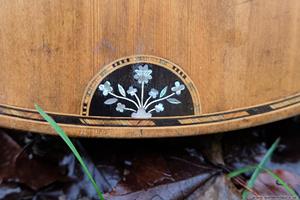 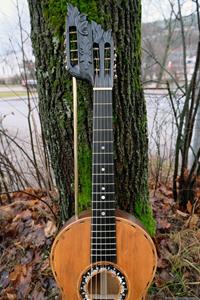 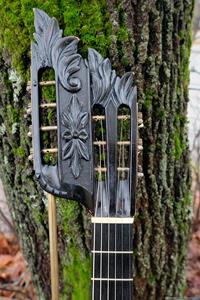 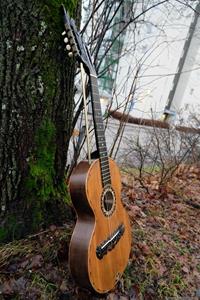 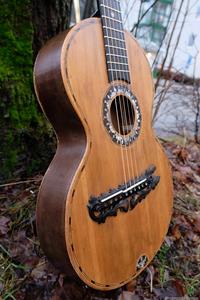 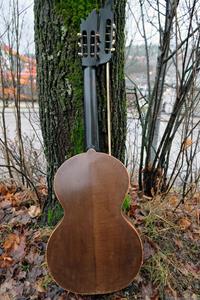 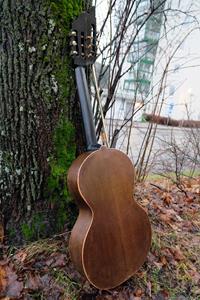 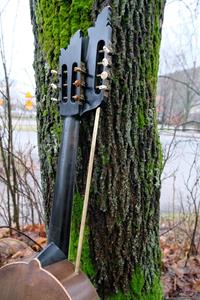 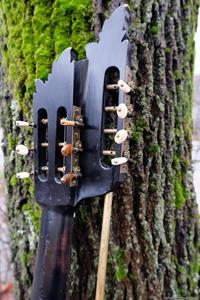