I finished a laggard from the last batch this week. An unusually modern GammelGura from my waiting room, an unstamped "Carmensita" Levin from one of the years 1951-1955. The format of it is a bit larger than the old Levin parlor guitars and it does not fit in the regular Gator 3/4 parlor case as it is too wide over the top. Although it is modern, it has a slotted head. The fretboard has clown-sized dots of 9 mm. The bridge in rosewood has the nice solid string pins in Gallalith (milk plastic) which are both light, strong and have a sound when you drop them on a hard surface. They are one of the best string pins you can find I think. The guitar was in perfectly OK condition without major problems, a few cracks in the bottom and in the top was probably what was there apart from high string height. The cellulose varnish was crackled. The tuning screws with the three-leaf clover-shaped buttons were really loose 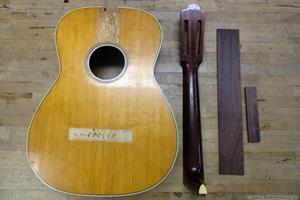 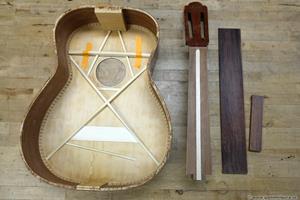 The neck was freed from its duralaluminum T-bar in aluminum and a rigid 10 x 10 mm carbon fiber rod was mounted. The flat rosewood fingerboard was replaced with Madagascar rosewood which was given a 16 ″ radius. The original MOTS dots (accordion plastic) were replaced with real mother-of-pearl. The width of the nut was reduced from 47 mm to 45 mm at the customer's request by making the edge of the fingerboard more perpendicular. Side dots on the fretboard were later mounted at the fret positions 3, 5, 7, 9 and 12. 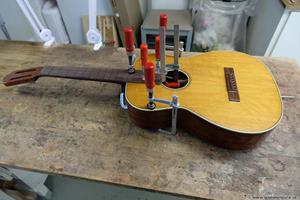 The celluloid bottom binding was loosened and the joint between the bottom and side could be opened with a sharp metal spatula and Stewmac's triangular seam separation knife. By this time, Levin had switched from hot hide glue to what I believe is casein glue. Casein is an adhesive made from milk, just like the Gallalith material in the nut and saddle on Levin from the same time. It is white and hard and can be more difficult to get loose than the hot hide glue. I really had to use some force when the bottom was to be loosened, so as not to get cracks in the thick and glass-hard cellulose varnish in the bottom, it was just as good to saw through the kerfing that had to be sacrificed. Mahogany is also softer than both birch and maple and can crack as well. The binding was later replaced with a plastic binding with a matching white-yellow-orange color.

Both top and bottom were thinned down about 0,5 mm with my new drum sander to just under 3 mm. I scraped off the very tough varnish on the original bridge and cleaned it to the wood. The bridge was not centered on the top which bothered me, the result was a wound in the paint on the base side which I later filled with super glue and scraped flush.

The customer wanted an X-bracing. It takes longer to do than the usual ladder bracing, but with my new Go-bar jig it's easier nowadays. I made my own variant with a bridge plate in spruce and an A-frame. Later it also mounted an extra reinforcement in the form of a spruce plate in the top between the top brace and the neck block. 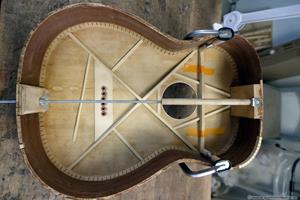 I glue in the new bottom kerfing with a variant of my bottom gluing jig. Here I have other abutments to fixate the side in the position it has with the old kerfing glued. You want to keep the shape of the sides towards the bottom. In the jig I then removed the old kerfing and glued in the new. 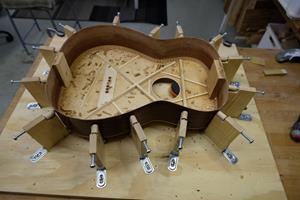 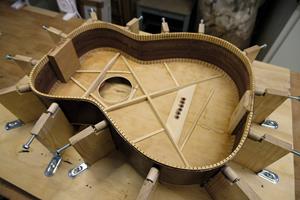 I think the mahogany on the sides was heated too hard at Levin's in the 1950s, at least the mahogany on the side was very brittle and crack-prone as they usually are. Too much heat almost charred the mahogany, which loses its toughness. I glued strips of maple veneer on the inside to strengthen the sides, a possible crack can otherwise propagate along the entire side if you are unlucky. Here I glue 6 mm veneer strips with the grain across the grain of the side. I use a flat abutment on the outside and an abutment with a piece of soft 4 mm yoga mat on the inside to press the entire surface of the veneer against the curved side. I yook no picture of the result before I glued the bottom. 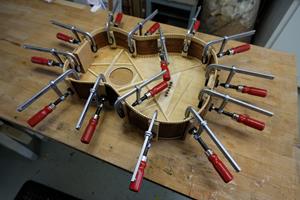 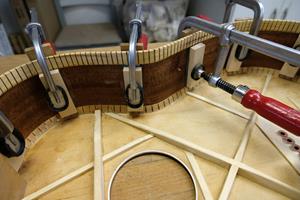 Before the bottom was glued, I changed the bridgeplate plugs that I have already had put in to the new recipe from the test guitar that gives even volume on all strings, actually most lower volume than before on the two unspun strings that otherwise always dominate. The fretboard got the new EVO Gold frets which I think is an improvement compared to the brass frets that Dunlop stopped making and which I used before. A K&K mic was mounted, it got my homemade version of it Tapestry StrapKeeper. The K&K mic gives poor grip to a guitar strap otherwise. A guitar strap plug was screwed into the neck foot.

I succeeded well with the neck set even though it took a whole working day to file and making shims. The tenon in the dove-tail of the neck is wide, which makes it extra difficult to file the "wings", which in a couple of places are very narrow. But it went well in the end.

I replaced the original tuning screws with the Stewmac Golden Age. I also mounted 12 metal grommets in the head for the tuner posts.

The intonation correction of the nut was unusual. I just needed to cut the fingerboard a few tenths of an mm and only mill back to the intonation point in the nut for the E and A strings. Even without nut intonation, this guitar would have intonated really well. If it's due to the X-bracing in this one or if it's due to something else I do not know, all guitars are individuals. The production of the segmented saddle was unproblematic, I have done a number of them now. 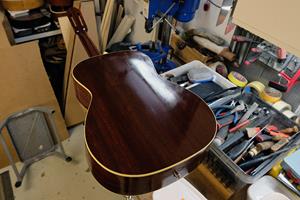 I had to work a lot with filling in pits in the glass-hard and crack-prone cellulose varnish in the bottom that got some damage to the edge when the bottom was removed. I filled the pits with tough Stewmac's superglue no. 30 and let it dry overnight. In principle, the pit is filled with plastic. Then you have to work for a good while with a razor blade and fine sandpaper to remove and even out the excess plastic from the glue. If you only get the plastic at the same height as the rest of the paint, the repair can look very good, especially after an overpainting. Since spirit varnish also adheres to cellulose varnish, the entire guitar received a thin layer of spirit varnish. When it has dried for XNUMX hours, the excessively shiny surface is matted down with fine steel wool and polished up to semi-gloss with a dry cotton cloth. The new clear coat gives the guitar a more uniform look and dampens the worst dings. I also used Herdin's water-based mahogany stain to give white dings the right color before varnishing.

I vibrated the guitar for three days and the tone opened up as it always does. It will continue to grow in its tone over time and when it is played.

I am very pleased with the result. Although the neck with the carbon fiber rod moved a little after a few days with string tension before it settled, the height of the saddle became the way I want it. Between 2,5 and 3,5 mm. Usually I do not like the tone of X-braced guitars, but this one has the typical GammelGura sound with Newtone Heritage 0.12 strings. As it is X-braced, you can probably use regular 0.12 strings as well, but NH sounds good. Maybe it has a little more bass and volume than the usual GammelGuran with ladder bracing. As expected, the volume on the strings was very even, just like on the test guitar. The sound is even and sounds like butter to the ear :-) Now all that remains is to send it to the customer far away in Luxenburg! 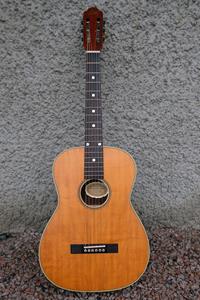 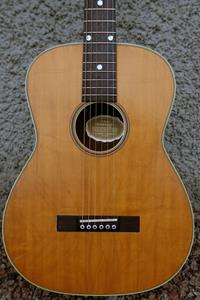 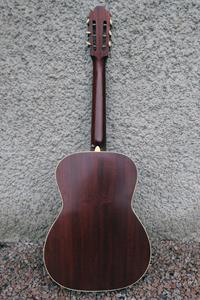 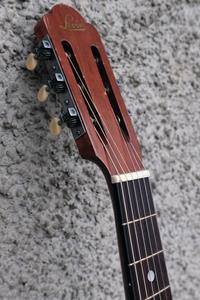 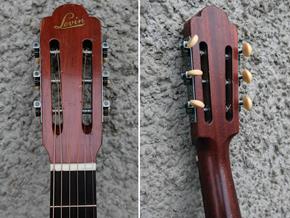 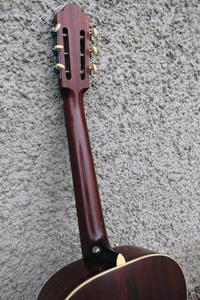 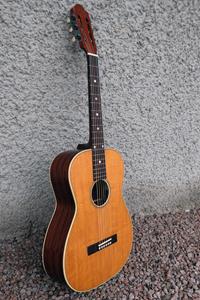 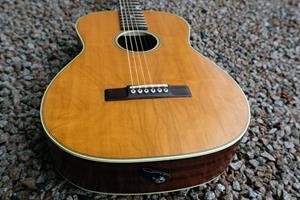 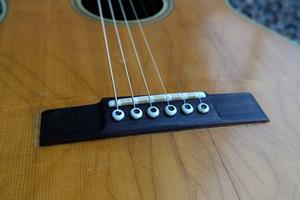 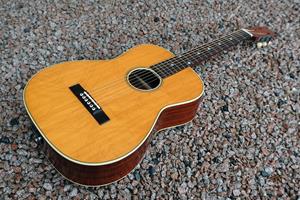