Next to the Old Gura batch I keep a repair or two on the side. Got a Bo Wretling guitar from 1948 in miserable condition. The lid was heavily crashed and the guitar unplayable. Made in 1947 in Umeå and with the very ugly paddle head that was on the early guitars before moving to Stockholm in 1949. Did not take any pictures before or after the repair of the entire guitar, but borrows a picture from the net on a similar copy.

All his guitars are extremely lightly built, no wonder he hated steel string guitars! Half of all existing Bo Wretling guitars have been torn apart by steel strings. Of the other half that have only been strung with nylon strings, half have also broken… between the thumb and forefinger. It is therefore difficult to find a whole Bo Wretling and if you do, it should be strung with low tension nylon strings.

Have always had double feelings about these guitars. They are too lightly built, slightly ribbed and too wide in the lid (about 40 cm). The paddle head was extremely ugly, on later guitars a more normal look was used on the head. The builder did not trust the glue but used screws for the stable which is quite pointless. In this there were also small spikes in spruce glued to the sides and surprisingly enough to the bottom ribs. I think that the varnish, at least on this one, is not a varnish without beeswax which is very sensitive to water and heat and which feels a bit sticky to put on. The grip board was also waxed. But there is also craftsmanship and a sense of wood in the guitars. He was a furniture carpenter in the basics and that probably explains both the positive and the negative.

Wretling trained two talented builders in Umeå before moving to Stockholm, Henning Granström and Thure Sundquist, who later produced many simple but good school guitars together and individually. Wretling is probably the inventor of neck reinforcement with arch file blades. Probably Granström and Sundqvist learned from him, they also used the same just for small end blocks as in the Wretling guitars. Another curious thing is that Wretling built the coffin for Evert Taube in 1976.

Well. Went in close contact with the guitar and started by opening the bottom. Wretling had a habit of sanding the lid and the bottom a little rounded from above along the edge, the bottom which was 3 mm thick in general was only about 1 mm at the thinnest place along the edge. Got to be very careful when I cracked the bottom.

Was very surprised by what was inside. Between all fan braces, a 0.6 mm maple veneer had been glued in! After removing the lid from all the veneer, it was easy to understand why. The lid was only 1-1,5 mm thick in the thinnest place and below 1.8 mm on the entire lid around the stable. It was obvious that a failed thinning of the lid was "saved" with the glued maple veneer pieces. I do not want to speak ill of someone who can not defend himself, but I would not have had a conscience to do such a cheating job. It was perhaps other times after the war and distress had no law. Can only state that the super small lid did not hold despite the repair. One of the ribs had also cracked. 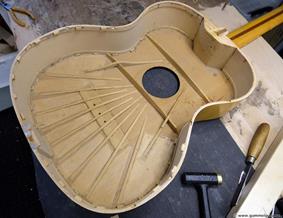 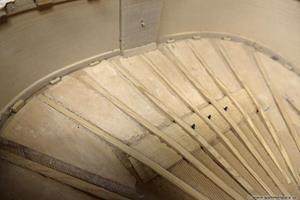 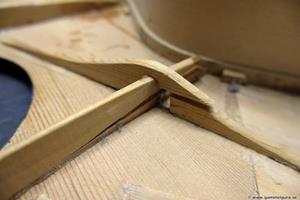 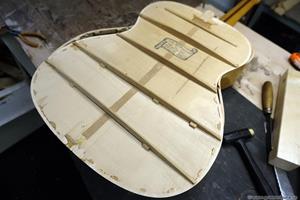 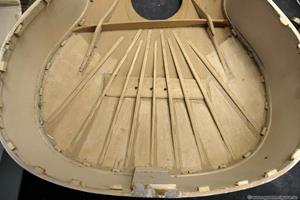 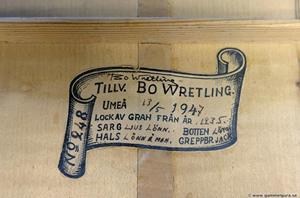 Because the customer wanted steel strings, the lid was cleaned of everything and new stronger ladder brace ribs were glued. But first, a large 1 mm thick spruce patch was glued in under the entire lid on the underside of the sound hole to strengthen the lid. With the bottom glued and the stable glued, the next step was to re-insert the neck, nylon strands have higher string height and the neck angle must be changed. The stable was also very tall, but it was possible to take it down to normal height and re-cut the notch for a new angled stable leg in legs.

When the neck was off, I saw that it had a narrow central dovetail with straight edges. This meant that the neck did not detach from the body before the entire neck foot was pulled up. Not a good construction and difficult when you have to change a neck. I have seen the same straight and narrow "dovetail" on old Swedish Gerdin guitars, maybe there is a connection. The neck consisted of two glued pieces of wood, the heating at the neck removal caused the glue joint to come loose and I had to re-glue the neck with skin glue. Drilled a round rod in birch also across the joint.

The bands were made of cheap and soft brass with flat top, so it became new and better brass bands. An odd detail was that the tuning screws were loose and of the type with poles with waist around the hole that otherwise sits on flat heads. They were nicely fitted so that the top of the post just received support from the wood on the other side of the notch. The neck was stable and straight, probably with arch file blades recessed under the grip board!

Varnished the beeswax with a couple of turns of alcohol varnish and cleaned the rosewood grip board from wax. 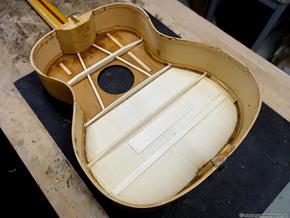 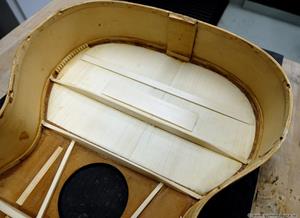 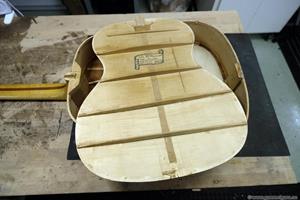 Came it together in the end and stringed up with Newtone Heritage 0.11 strings that pulls like a normal 0.10 set. On the whole a really good guitar after all the fix, but Bo would definitely not like the conversion to steel strings 😉